News4Jax recently published a piece recognizing our very own Rubin Iron Works for its recent contribution to a 9/11 Memorial in New York City. Read the article below or visit News4Jax to see their video spot featuring Berman Brothers. 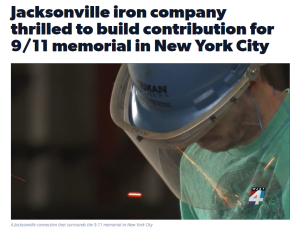 JACKSONVILLE, Fla. – The next time you visit the 9/11 memorial in New York City, you will find a Jacksonville connection that surrounds it.

David Stoddard is the vice president of the company. The team is small, but talented, and one of their greatest projects honors the men and women who died in the terrorist attacks on Sept. 11, 2001.

As the idea for a memorial to honor the fallen became a reality, a company called Delta Fountains was tapped for the project.

“We had been doing work for delta fountains off and on, they liked our quality and they got the job so they handed it to us,” Stoddard said.

The welding team built what’s called weirs to garnish the massive fountain at the 9-11 memorial.

“This started as a plate, flat plate, and then we put it in our break to get the radius these pieces were water jet cut with holes in it, and then we just bolted the fingers to it and the water runs off of it this way,” Stoddard said.

After nine months of work the plates were complete, shipped to New York and installed.

A memorial with metal bound together in honor of those that lost their lives 20 years ago.

“It’s quite important, because its very sobering, but its so very personal that we can actually be apart of something so important to members of the families to be able to produce a memorial,” Stoddard said.